Armor helps when fighting mobs, and journeying through dangerous terrain, as it reduces damage taken from falling, lava, mobs and other things. However, it will wear down, and if you are in the middle of Mordor when that happens, it's not good! A full set of armor consists of a Shield a Helmet, a Chestplate, a pair of Leggings, and a pair of Boots.

Armor parts are crafted on the same way as all other items. View the specific pages for crafting instructions:

There is a modified inventory screen: Left to the crafting field are two new areas. The area in the middle presents the player. The area on the left adds six inventory slots where you can place your armor parts. It is not necessary to place armor parts in a specific order. Just put is in one of the six slots. For shields it is most practical to place them in the lower right, to avoid overlap with the chestplate.

The middle area presenting the player is a preview. Here you can see the armor parts that you are wearing.

An armor only protects you when you're wearing it. When an armor takes damage, it wears off. The use factor defines how fast it wears off. Every time a piece of armor takes damage, the use value is added to the total wear. When the total wear of an item reaches 65535 (max 2-byte value), the piece of armor breaks. The use value is noted for all armor pieces on their specific page. The lower the use factor, the longer the peace of armor lasts.

Armor with healing capabilities do not really heal a player. They have a chance to undo received damage. This chance is a percentage calculation, based on the total Heal value of the armor parts worn. When wearing a bronze armor the chance of reverting damage is 30%

When wearing an armor, the Hud also changes. There is a protection bar above the health bar, indicating how strong your armor protection is. 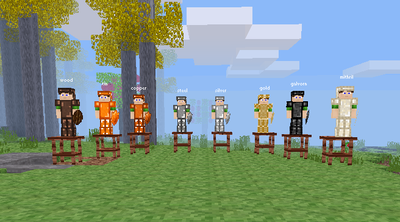 The basic armor is armor that is made from wood or metal and is nothing very special. It comes as training, tin, copper, steel, bronze, silver, gold and mithril. It is needed though, because without an armor a player looks like this:

Training armor is the weakest armor, and is good for just getting started off, or training. It is cheap, and made from Wood.

Another fairly weak armor, stronger and more durable than training armor, and somewhat more expensive. Both Tin and Copper armor have the same stats.

Steel armor is a mid-way armor, not overly expensive, but not cheap either, offering fairly good protection and durability.

This is the first of the three armors that are linked together with their stats. Bronze is more durable than silver armor, but does not offer quite as much protection.

This armor provides better protection than bronze armor, but is slightly less durable.

This armor provides protection that is equal to silver armor, and durability that equals the bronze armor. It has the best stats of silver and bronze armor.

The armor now is one of the best you can find in the Lord of the Test game. This is the second best armor, only beaten by mithril armor.

This is the best metal armor in the Lord of the Test game. No other armor is as all round good as this. Other special armors beat it in single stats, but no other armor equals it in all round durability and protection.

The sturdy armor that the horselords use on the plains of Rohan. This armor is made of Pearl.

The armor of the woodelves of Lorien. This armor is made of Athelas.

The armor of the mining dwarves. This armor is made of Rough Rock Lumps.

The men of the west are used to battle. Fighters need good armor. And they have! Made of Limestone.