From Minetest Wiki
Jump to navigation Jump to search

This article shows the development history of the map generators in Minetest.

Development of a single map generator

Initially, Minetest (then called “Minetest-c55”) had only one map generator which was continously improved and had its own version number, where each version replaced the previous one. The earliest map generators are based on 2D Perlin noise.

Also dubbed “Version 0”, this section summarizes the earliest map generator experiments before the release of the first official map generator. 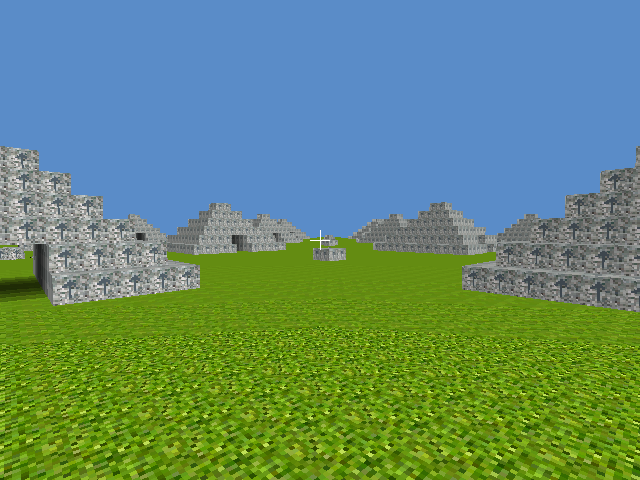 In the very first known version of Minetest-c55, there was just flat terrain made out of grass blocks with stone pyramids on top. There were a few holes. There were no other blocks or caves. The terrain was always the same. 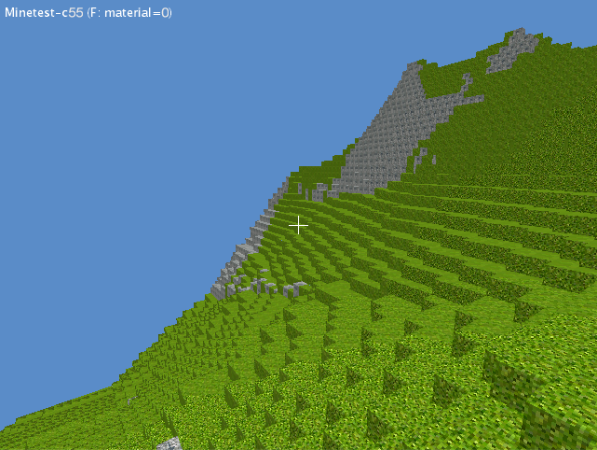 The terrain was no longer flat and the pyramids are gone. The terrain generation was horrible, but at least terrain could be generated. It consisted of grass blocks and stone at surface. Very simple squareish caves could be found below the surface. The terrain was still not random. 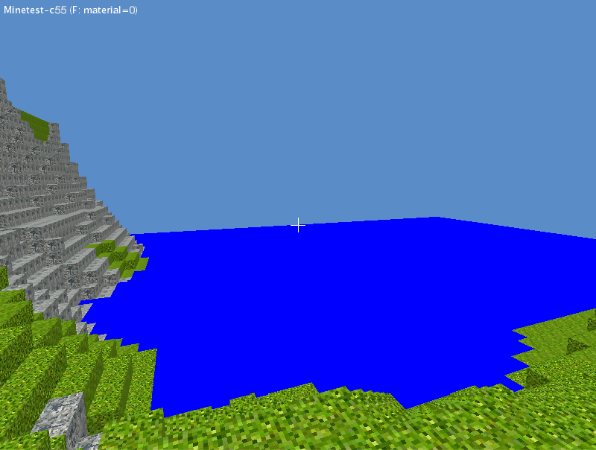 Water has been added and forms oceans at a fixed sea level. 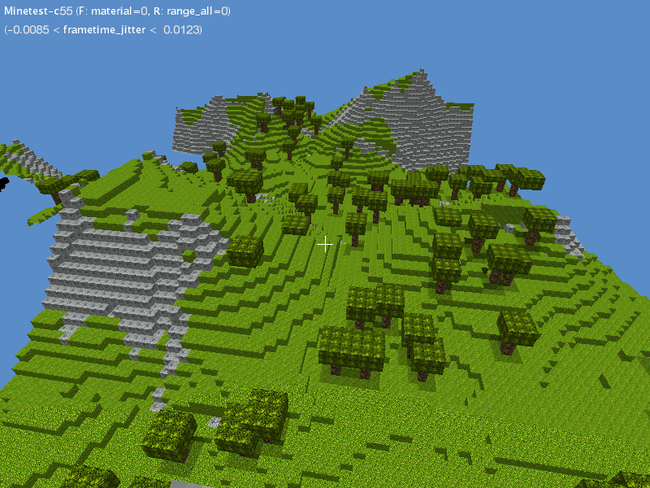 Trees with leaves were added in, but they were very basic. Bushes (a single leaves block on the ground) were added as well. These primitive bushes have been removed in a later version. Not mapgen version 1, but very close to it. Mountains were made more pronounced, ore generation was better and trees have been improved. Although this was a development version. 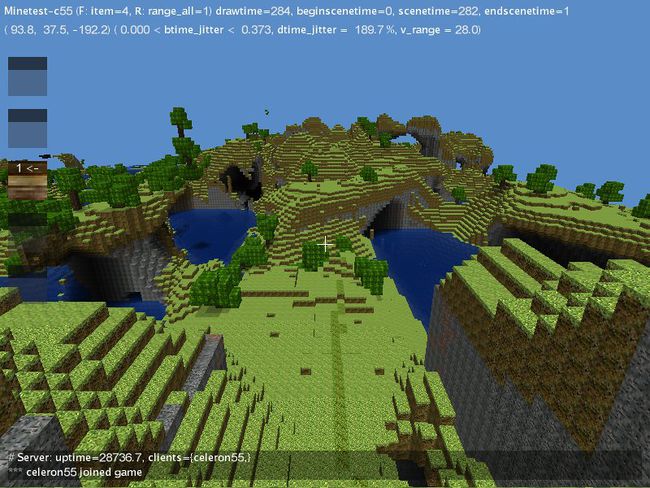 Things were tuned a little better. Sand has been added and formed sand beaches. A simple mud flow algorithm smoothens out dirt / dirt with grass hills. The cave generation has seen notable improvements and iron ore has been added as well. 3D Perlin noise is used to generate this terrain. Official map generation for version 0.3.1. It still uses 3D Perlin noise like the previous versions and is iconic for its extreme and often “blobby” terrain. In the 0.3 versions, this map generator hat predefined biomes like the current v6 map generator. In Minetest-c55 0.4, it was removed, but has been revived later (→#v5).

This version of the map generator is also used in Voxelands, a fork of Minetest-c55. Plains biome in mapgen version 6 (before Minetest-c55 0.4.3) with visible “terrain lines” which were fixed later

Mountains in mapgen version 6, before Minetest 0.4.7

Version 6 of the map generator was introduced in Minetest-c55 0.4.0 to replace the map generator version 5. This version uses 2D Perlin noise again and the terrain is now much smoother and more realistic than of the previous version. Map generation has also become much faster.

Version 6 was the last version of the only map generator before support for multiple map generators has been added. This mapgen has then directly be continued under the name “v6”. The mapgen “v6” (also known as “mgv6”) is the direct continuation of version 6 (before support for multiple mapgens has been added) and has pretty much the same features. In Minetest 0.4.13, support for snow biomes and ice sheets has been introduced to v6. This mapgen it is still officially supported in Minetest, it will not be removed anytime soon and improvements and bugfixes are still applied from time to time. This mapgen was introduced in Minetest 0.4.6 by celeron55. It creates a world with only Air (can be changed with configuration) and is intended to be used by mods and games for making custom map generators, so they can start completely from scratch. The name “singlenode” means that it generates a single type of node everywhere, Air by default.

This map generator has been hidden from the map generator selection screen for a couple of versions up to 0.4.16, in which it has been re-enabled again.

This mapgen was introduced in Minetest 0.4.6 by proller and contained many experimental features. It is based on v6. Major new features included floating islands at Y=500 and above, rare huge caves, and a more extreme terrain near the world boundaries in form of larger biomes, higher mountains and deeper oceans. It has been removed in version 0.4.10 because it was considered to be of low quality. Mapgen v7 in Minetest 0.4.9 without biomes Also called “mgv7”. It was introduced in Minetest 0.4.7 by kwolekr, in which the map generator was still unusable. This map generator uses a combination of 2D and 3D Perlin noise. It is notable for its large rivers at Sea level. Caves in v7 are also very different than in v6, they are generally much larger.

This mapgen has a long history of development and has seen countless improvements over the Minetest versions. The mapgen “math” was introduced in Minetest 0.4.8 by proller. This was really a collection of 3 different map generators based on simple maths. It was capable of creating Menger sponges, mandelboxes and spheres. Mods could adds biomes with Minetest's biome API, but this was never used in Minetest Game, so only stone worlds were created by default.

This map generator has been removed in Minetest 0.4.10 when proller left the project because it was considered to be of very low quality and had many obvious lighting problems ([1]).

The math mapgen is being continued in Freeminer, a fork of Minetest. But this mapgen is not identical to the historic version 5. The terrain shape is nearly identical to the historic version. The main difference is that the modernized v5 map generator has mod-defined biome support (like v7), rather than predefined biomes. It also shares many other features with v7 which are not related to the terrain, for example desert and sandstone dungeons. Some features which have been added to v7 were often also added to v5.

One of many possible terrains by the fractal mapgen in Minetest 0.4.13-dev

Introduced in Minetest 0.4.13 by paramat. It creates worlds based on fractals, specifically those based on 3D and 4D Mandelbrot and Julia sets, including a mandelbulb. As of version 0.4.15, there are 18 variants which this mapgen supports. This mapgen has a similar intention like the old math mapgen, but it has a very different feature set compared to math. The flat map generator was introduced in Minetest 0.4.14 by paramat. It can be used with or without biomes, decorations, caves, dungeons, etc. Introduced in Minetest 0.4.14 by Duane Robertson. It is notable for its “valley”-like shapes and its flowing rivers. These rivers are very different than in v7: They flow downhill rather than being flat at ocean level. Introduced in the developer version on 6th July 2017 by vlapsley. It has been first showcased in the forums. About 1.5 years later, it was finally released in a stable Minetest release: Minetest 5.0.0. This mapgen is notable for its complex mountains (multiple variants: terraced, stepped, very big, ridged) and hills. Vast flat plains, mountains and oceans dominate the landscape. Fjords are also possible, but rare.