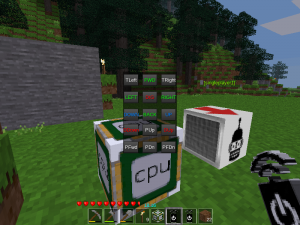 This page is dedicated to using basic_robots with a remote.
A remotecontrol (rc for short) can be used to give orders to a robot.

Each keypress causes the robot to do one action.
This mode is quite useful for mining, because the robot can dig faster then the player.

The id-setting determines which remote controls which robot.
So, you can have several robots active at once, and control them with different remotes.

This only works in singleplayer, in creative-mode, or for the server-admin.

Recipe for a spawner:

Recipe for a remotecontrol :

Place the spawner on the ground, and put the remote on the hotbar.

Rightclick the spawner, enter this program:

The robot should report the position of the spawner once, and its current position on every tick.

This works, but fills the chat with text from all those position-reports.

Running this on a server in multiplayer would require some changes.

as in, pointing at the sky, or at nodes out of range

As that remote is in program-mode now,
we need another, 'empty' remote to steer the robot around.

This page has a focus on small, useful programs, and programs for the remote.

The robot only works well if spawner, player and robot are close enough together.
The reason is, that in minetest actions only happen within a few blocks around the player(s),
and the server might unload 'unused' blocks from memory.
This distance depends on the server-setting, usually 3-5 blocks.

Here, we calculate the distance between spawner and robot:
Spawner:

Here, we calculate the distance as the Manhatten-distance.

This 'paves' a walkable bridge, even over water or thru the air.
Robot needs the building material in its inventory when starting.