From Minetest Wiki
< Games
Jump to navigation Jump to search

The Development Test (or “DevTest” for short) is a test “game” for Minetest which is only intended to be used by developers. This is not a real playable game and not meant for players. It's meant for development (both core developers, and modders which want fast startup for testing mods).

It is shipped together with Minetest by default. 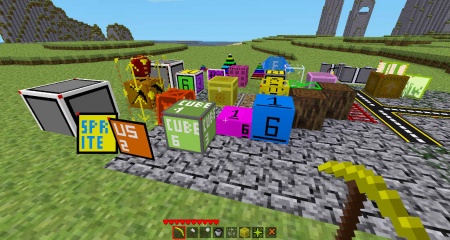 The primary purpose of Development Test is to help Minetest developers and testers to test Minetest, i.e. the node properties, item behavior, mapgen, and other stuff that you can influence with Lua code.

The secondary purpose is to aid with developing simple mods that have no dependencies. It's a good simple way to test if your mod still works in a different environment.

A cornerstone of Develpment Test is the Principle of Least Interference. This means that Development Test tries to screw as little as possible with the default Minetest behavior, unless the user explicitly enabled it. This should therefore make it a relatively safe environment to test your mods in.

Development Test is NOT meant as a template for new games.

Detailed help can be found in the README files found in the Development Test game directory. The following sections only give an overview of the features.

Developent Test includes a lot of things for testing. This includes items, commands and settings. This section gives only an overview, and is not a full description.

There are many items. This section does not list all of them, but only the types of items.

Placable block that contains every item. Rightclick to access.

Tools that allow you to test one particular feature. Examples are the Param2 Tool and the Object Property Editor.

The tools can be used with multiple keys and do different things, depending on which keys you press. These are the possible key combinations:

Not all tools use all possible key combinations, most of them only use a few of them.

Tools made to test mining/digging blocks. Tool wear is activated.

Items to test minetest.item_eat. Use punch key to eat.

Nodes whose primary function is to be used by the mapgen to generate the world: Stone, water, dirt, sand, ...

Nodes that each test one particular feature from nodes, mainly the different drawtypes, rendering, but also gameplay features like damage.

Hint: Use the Param2 tool to change the param2 of nodes. This is relevant for many drawtype test nodes like Wallmounted Test Node.

A set of items that only exist as placeholder to test something different, for example formspecs or crafting.

The most useful command is “/stuff”, which gives you the Chest of Everything and other initial items (should you have lost them).

The most notable test is the formspec test, a command which opens a test formspec that allow you to test all those formspec elements.

Say “/help all” in chat to see the full list of commands, just like in any other game.

The settings allow you to set some usage details to make your life a little easier (or harder).

The settings allow you to turn on automated tests that run on each start. Apart from that, the settings also control some mapgen details, and some minor stuff.

Go into Minetest's “All Settings” menu in the main menu to access the settings.