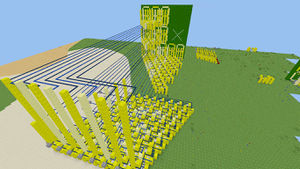 An example of the mod Mesecons.

Mods (short for modifications or modules) are user-created modifications to a game in such a way that adds to or alters the gameplay. Some larger mods may add a lot of content to the game, while other smaller mods may add more settings/customization options or tweak the gameplay in small ways. Server mods or plugins mainly give server admins more options and ease of use, and all mods for singleplayer can also be used in multiplayer.

While Minetest mods are generally safe to install as they run by default in a sandboxed environment, one should exercise caution with mods as they may modify your world data in an undesired way. A good way to protect your game from such problems is to regularily back up your world folder(s) when installing new mods.

There are many mods or plugins available to complement the original Minetest game or give server admins more options and control over their servers.

A modpack (short: “MP”) is a collection of mods to group them together. Basically, a modpack is just special directory containing the actual mod directories. It's purely a logical grouping and is done mostly for convenience and to group closely-related mods together. The main difference is that they will be displayed differently in the mod manager in Minetest. Apart from that, there is nothing special about modpacks or mods inside a modpack. Individual mods in a modpack can still be enabled and disabled as if they were standalone mods.

A Client-Side Mod (short: “CSM”) is a mod used to customize your Minetest client. Client-Side Mods can be used when connected to a Minetest server because they are loaded locally. Client-Side mods require at least Minetest 0.4.15-dev from sources, compiled after April 1st, 2017. Please note API is currently not stable and can change.

Generally, all mods you would want are available on ContentDB nowadays. They can be installed from the main menu by going to the Content tab and clicking on the Browse online content button.

For old or experimental mods, check the Mods subforum.

Starting with Mintest version 5.0.0 mods can be installed using the Content tab in the Minetest launcher.

Mods are written in the scripting language Lua. The official Lua API documentation can be found at lua_api.txt or in HTML format here.

The ingame server command /mods will list the active mods of the actual running game.

Most popular mods used on public servers listed at servers.minetest.net as of April 2020
Retrieved from "http://wiki.minetest.net/index.php?title=Mods&oldid=27413"
Categories: