From Minetest Wiki
Jump to navigation Jump to search 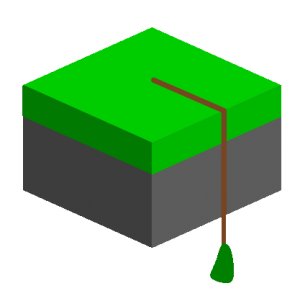 The page is intended to provide information for teachers, youth and social workers of all kinds who want to use Minetest in an educational sense together with children and young people.

There should be information for the minetest beginner, both for the teacher and the student. What possibilities Minetest offers and where it has limits. How to use Minetest on your own and extend it with mods. Or how to set up a server on the Internet and protect it from unwanted access. Particularly for the work with children, care is taken to ensure that the children can be adequately supervised in order to facilitate orderly cooperation.

Teachers who are willing to translate the texts into other languages can of course do so. It is also possible to create new pages in your own language, which can then be translated by others into their own language. As a basis, however, all information should also be available in English.

Minetest is a free open world game for almost all operating systems. In randomly generated worlds consisting of blocks, the player can extract different resources, combine them with each other and shape the world according to his or her liking. Minetest is very similar to other sandbox computer games like Infiniminer and Minecraft. The game doesn't actually have a goal or an end, but the focus is on constructing buildings from blocks. However, it is also possible to construct a world in such a way that certain goals must be achieved, depending on what is desired. Technically, the minetest engine is particularly focused on two goals. The game content should be easily modifiable and extensible by Mods and should also work on older and new machines.

Why Minetest and not Minecraft?

Minecraft is much better known and many children and teenagers are already playing it. So why use Minetest? Here are a few arguments:

Why switching from Minecraft is so easy:

The biggest mistake you can make with Minetest is to consider only the naked system you get with the installation. Because Minetest is (almost) nothing without the extensions (Mods) and games. The main developers are very reluctant to stick to fixed features. But extending Minetest is much easier than it is with Minecraft if you're not an absolute computer layman.

On this page we have therefore gathered information to help you learn about important enhancements that make Minetest a fully-fledged replacement for Minecraft. Surely it will take some time before a minetest variant will be released, which will make it easy for teachers with little personal experience to manage larger numbers of students. The fact that there is no company behind Minetest will certainly have an impact. That's how community members develop what they like ... sometimes better than in Minecraft... but here and there there is a lack of details.

However, this collection of information here is intended to enable technically interested teachers to use Minetest by assembling all necessary information. You are welcome to add your own information. Everyone is invited to attend.

There are two ways to get a first impression of Minetest:

The first variation is probably better for beginners, as they can play alone in peace and quiet. The servers show examples of heavily expanded minetest variants and are therefore especially suitable for those who already know Minecraft and have certain expectations.

Minetest offers the possibility to simply create a local server that can be used with other users that are in the same LAN/WLAN. This is very useful for schools or if you meet with other in a foreign location.

Anything that Minetest doesn't seem to offer in comparison to Minecraft can be inserted into Minetest via an extension or modification, called Mod. That seems awkward, but it's so easy that it's no problem again. You just have to find the right mod.

The exact number of mods is not known. There is a list of more than 700 mods, but it is certainly not complete, because anyone can create a mod and publish it anywhere. The effect of the mods may be classified as following:

A lot of the Mods offer combinations of the possibilities.

Minetest offers a lot of mods, but there is no good overview showing the most important and big mods as well as the newest one. The following overview sorts some tested mods according to their meaning and provides information about the content and how to use them.

Create you own Mod

Setting up a Minetest-Server in the Internet

If you want to work with a group of children it is a good idea to have you own Server in the internet.

So far there are not yet any good providers where you can quickly order and set up a minetest server. One reason for this is that the installation of mods is usually necessary and you have to access the remote computer. While Minecraft now has graphical user interfaces, Minetest requires everything to be done from the console.

If you have successfully installed the Minetest server and can also reach it with the local Minetest client, you should make some settings which are mainly about protecting the server from unauthorized access. This can be done not only by mods but also by settings in a special file.

If the server is set up correctly, it can start. If you share the server address or point to the server in the public server list, other users will come to the server and so it may happen that you have to intervene as an administrator. So here are some important commands and options you have as admin.

Now the server is hopefully perfectly set up and all players and the admin are pleased. Surely there is always something to do, many of those things can be done when you are on the minetest server yourself. But some things can only be done on the console and if you automate them, you can save yourself a lot of work.

Command-Blocks as an universal tool

Command blocks are special blocks that can be used to execute text commands that are otherwise entered manually. With it you can automate a lot and relieve the admin of work or do a lot of other things... as you need it.

Here are some very special ideas for a server for educational use.

Ideas what to do with children in Minetest

Create Mods, Texture packs an Skins on you own

Creating a simple Mod for Minetest is quite easy.