Crafting is the way in which blocks and items are made in Minetest. To craft something, the player must move items into a crafting grid and then arrange the items into a defined pattern.

Many additional player created recipes and other crafting grids are available through mods.

This section explains the basics of crafting in a very general way. The rules explained here are true for basically all mods.

Crafting grids generally work like inventories. So a crafting grid found in your inventory menu can be used/abused as an extension of the player inventory.

You can’t place items on an output slot, however. You can only take items from it. 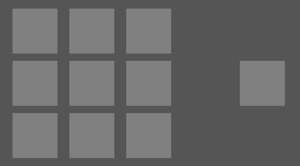 Minetest Game has only one crafting grid. It can be accessed through the inventory menu and it has a size of 3×3 slots.

A crafting recipe consists of at least one input item and exactly one stack of output items. Input items can be either concrete items (for example, Wooden Planks) or an item that is member of a group (for example, the wood group, a group where Wooden Planks and Junglewood Planks are members). If a recipe has multiple slots which require the same group, this does not mean that you have to place the same item in all of these slots. See #Crafting recipes using groups for a detailed example.

Minetest Game and other games and many mods make extensive use of the group system, understanding it is crucial to craft efficiently.

To be able to craft, you also need to know which crafting recipes are available in the first place. The preferred way is done by using a so-called crafting guide, a GUI element which tells the player the available crafting recipes in-game. It is a very important tool for playing.

Using up the items

Normally, crafting one item removes exactly one item of each slot in the crafting grid.

A crafting recipe may also replace a item with an item instead. This is currently rarely used in mods. In Minetest Game, using Lava Bucket as furnace fuel does not use up the item, instead it leaves an Empty Bucket in the fuel slot.

There are are two kinds of crafting recipes, shaped ones and shapeless ones.

For a shapeless recipe, the necessary items just have to be placed on any available slots of the crafting grid.

Smelting and repairing are just a slightly different form of crafting, most rules described here apply, too. For smelting, the crafting grid is simply just 1×1. A repairing recipe is always shapeless recipe consisting of two tools of the same kind.

This section contains extensive examples of the basic crafting types. The examples here are all taken from the Minetest Game.

Bronze Ingot is an example for a shapeless recipe. You need one Steel Ingot and one Copper Ingot. You can put them anywhere in the crafting grid you want, so the following crafts are all valid:

To keep the wiki pages short and simple, in the actual page there is only one of the possible crafts shown.

Most games support repairing recipes. If you have two worn out Steel Shovels (or two other tools of the same type that wear off), you can repair one by placing them somewhere into the crafting grid:

These are all valid crafts of a shaped 3×1 crafting recipe:

These crafts are all part of the same recipe. The actual wiki page does not repeat the other two crafts for simplicity’s sake.

A crafting recipe using groups could be represented like this in the wiki:

Note that there is a special icon with a “G” in it. This icon is a placeholder for anything which is part of the “stone” group. So a furnace is build from 8 items from the stone group. Cobblestone and Desert Stone are examples for members of this group.

So you can build a furnace completely out of Cobblestone:

Or everything mixed up:

To help you get you started in Minetest Game, we give you a list of the most important items and blocks to start with. Begin with the top of the list, check out the “Crafting” section of the respective page (in that order), craft the item in Minetest and return to this page when you have managed the craft, then go on with the next craft in the list. For convenience, the links put you directly to the “Crafting” section.

See Blocks and Items for full lists of blocks and items. You find crafting recipes on the respective pages. Also check out the pages listed in Groups to get an overview for the group craftings.