Biomes in Minetest are a part of the map generation. Biomes are areas with similar ground and underground and vegetation.

Note: Blocks written in bold in the “Blocks” column are the land surface blocks of this biome.

These biomes form between land biomes and ocean biomes.

Oceans are large bodies of water and have sand as the sea floor with occasional patches of clay. There are several ocean biomes in Minetest Game, one for each land biome. Each ocean biome has the same temperature and humidity requirements as its land counterpart.

The defining feature of the ocean biomes are, of course, the oceans, but they actually extend way below the ocean floor of most oceans, down to the Underground biome (see below). So ocean biomes also affect the appearance of the underground.

This refers to the part of the world that is at or below Y coordinate -255 (directly below the ocean biomes) and it extends all the way to the bottom of the world, although most players would consider “the Underground” to be everything below sea level. Note the ocean biomes go very deep into the underground as well.

And indeed, most features of the underground biome, like ores, can be found in higher places as well.

Biomes in v6 are rather simple, but there are some unique features not found in other mapgens. This mapgen has a few biomes and 3 tree species. In, v6, the biomes do determine the terrain shape to some extent.

In Minetest Game, some blocks are not generated at all, but nothing essential. For example, there are are no aspen trees, acacia tree and corals.

Technically, the v6 map generator has a predefined set of biomes which can't be changed by mods directly. The outcome in different games will generally be very similar. Games usually only add to the v6 mapgen by creating so-called decorations, for example flowers and grass.

The distribution of v6 biomes can be seen here: File:Biomes_v6.png.

Floatlands is an experimental feature of the v7 map generator. They are disabled by default. To use them, they have to be enabled with the setting mgv7_spflags first.

Floatlands are floating pieces of land that float way above the ground level (Y=1280 by default). Like on ground level, there are various terrain shapes, like flat lands and huge mountains.

In Minetest Game, the floatlands have 3 simple biomes, as of 5.0.0. This might change in future versions. Also, all ores can be found in the floatlands frequently, they are often exposed at the bare terrain. But it's quite a hassle to go all the way up to the floatlands to reach them. 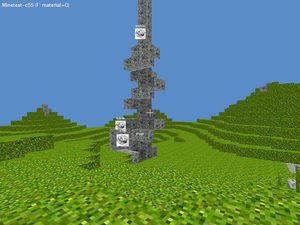 Early chaotic mapgen, no biomes at all 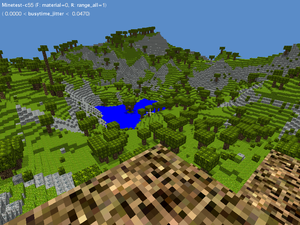 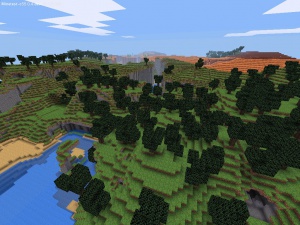 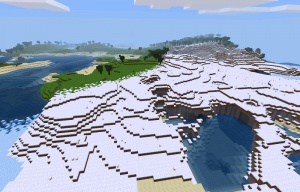 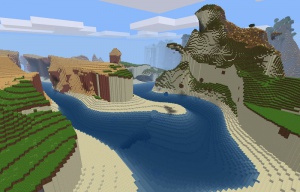 For more detail on the evolution of the map generator, see the Map Generator Evolution page.